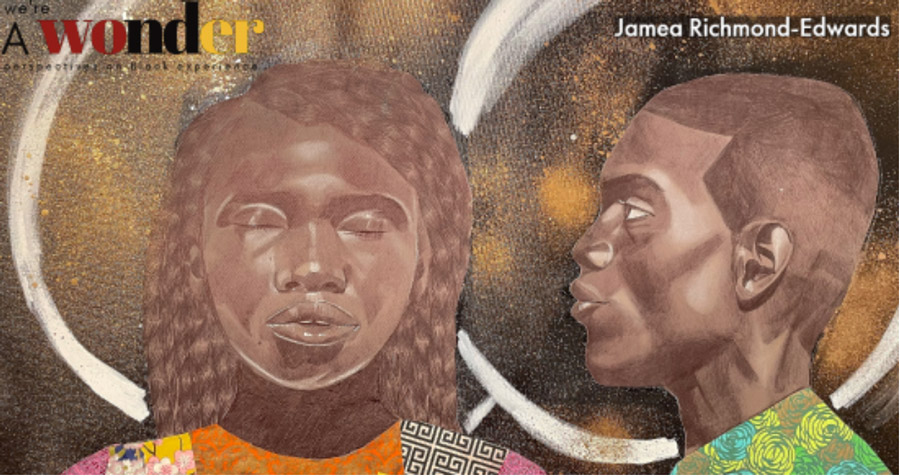 This exhibition, running from February 23 to April 16th insightfully explores the fullness of Black experience in America and abroad. Through exhibitions, lectures, and artist engagements artists and scholars contribute to nuanced, and unique dissections on the historical, embodied, and psychological experiences of people of color. This ongoing engagement draws ties between three solo exhibitions, each of which speak from black experience.

Currently on display is the work of Jamea Richmond-Edwards. Jamea Richmond-Edwards’ archetypal and simultaneously idiosyncratic women, flourished and attired in color and texture, exist at the intersection of gaudy and the cutting edge of fashion. Somewhere beyond mere style, this space of representation reflects the aesthetics of Black Detroit dress and the ethos of a generation influenced by 90s hip-hop. Flirting with the outermost edge of taste, the complex material trappings of these figures reflect the depths of their character, motivation, and circumstance.

Jamea Richmond-Edwards was born and raised in Detroit, MI. She graduated with a Bachelor of Arts degree from Jackson State University in 2004, where she studied painting and drawing and went on to earn an MFA from Howard University in 2012. Jamea has exhibited her artwork nationally and internationally, including at the Delaware Art Museum, California African American Museum, Charles Wright Museum, and Kravets Wehby Gallery.

Register for timed tickets to visit the gallery