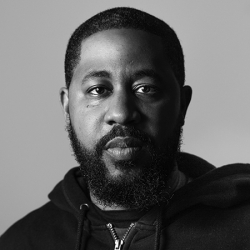 Currently on exhibit in thecarrcenterglobal.org (TheCVC) Managing Expectations is a collection of work by Christopher Batten

Born in Detroit, Michigan Christopher Batten began his undergraduate training at the Columbus College of Art and Design, and later completed his training at the College for Creative Studies where he earned a BFA in Illustration in 2006. Batten is a 2017 graduate of the Maryland Institute College of Art’s LeRoy E. Hoffberger School of Painting MFA program, where he received a Hoffberger Merit Scholarship, the Dr. Leslie King Hammond Graduate Award, and two AIGA Worldstudio Scholarships. While at MICA, Batten also served as a Graduate Program Assistant to Joan Waltemath, Hoffberger School Director. His artwork has been exhibited in cities such as Detroit, New York, San Antonio, Dallas, Baltimore, and Atlanta.

Batten’s works have appeared at the Charles H. Wright Museum of African American History, Red Bull Arts Detroit and in the pages of New American Paintings. He has been an Artist in Residence at Red Bull Arts Detroit and at the Creative Alliance in Baltimore. Batten is also an art educator and is currently faculty at Bard High School Early College Baltimore and an adjunct professor at the Maryland Institute College of Art.

Learn more about the artist at:  https://www.cbatten.com/