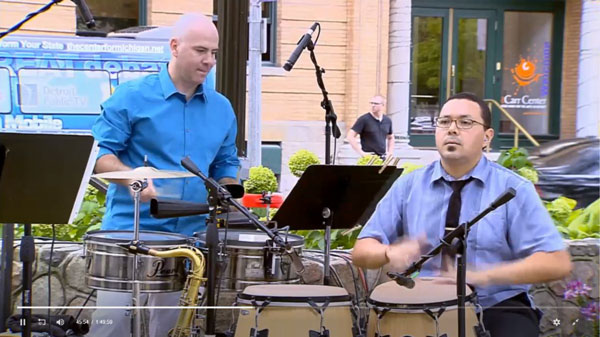 “… each band member brings a high level of comfort and experience with Afro Cuban music…a colorful and exciting repertoire… the rhythm section works like a well oiled machine, churning out grooves that are simultaneously supportive, fiery and strongly rooted in tradition.”
– Chip Boaz, Latin Jazz Corner

Here’s hoping your week has been productive … filled with positive thought and good intention. Today we look back at an outstanding night of music from the Detroit Performs LIVE from the Carr Center series, originally broadcast on Detroit Public Television and produced in collaboration with our friends at DPTV and WRCJ, 90.9

Tumbao Bravo is an accomplished and exciting Cuban jazz combo. They have released five critically acclaimed CDs of mostly original compositions. The veteran ensemble has been featured on all of the major jazz public radio stations throughout the United States. The title cut of their 2009 CD, Un Sistema Para Todos, was used as a soundtrack for the USA Network TV show, Burn Notice. Winner of the 2005, 2007 and 2013 Detroit Music Awards for Best Jazz Recording and Best World Music Band, this talented combo of musicians has toured extensively and performed at all of the major Michigan jazz / music festivals.

It was also on a Thursday, a beautiful summer night, August 2015. Our Summer in the Park programming was in full swing and the concert on this memorable evening was the sultry and rhythmic sounds of Tumbao Bravo!

Do I hear a chance to do some salsa dancing? Anyone?

Paul VornHagen, accomplished saxophonist, flutist and vocalist leads this award-winning Cuban jazz combo. Click here to listen The daily challenges of the ongoing health crisis continue for each and every one of us. Arts organizations like ours, who are so dependent on audiences and other public support for survival are truly feeling the pressure.

If you are able to give we ask that you please consider gift to the Carr Center, We thank you.