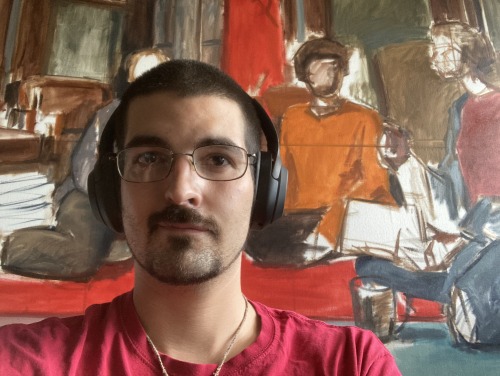 I was born in Chicago and raised in West Michigan. I attended UM Ann Arbor, and received degrees in both Political Science and Studio Art in 2014. After college I moved to Detroit, joined Riopelle Artists’ Collective, and helped found the Michigan Student Power Network (a statewide organizing network of progressive students) and the Brick and Mortar Collective (a group equity housing co-op located in Detroit).

My artistic and political practice have evolved alongside each other. When I first began painting I drew inspiration from figures I admired in history, often drawing and painting people as I delved into their histories in class. I radicalized throughout high school and early college years, and as I began to actively organize more, I connected with incredible people actually doing the work of organizing their peers and communities. I became inspired by the relationships I felt with and saw between these people, and my painting evolved to reflect this.

I have spent the time since college on a variety of organizing projects with MSPN and the Brick and Mortar collective, all while maintaining a studio painting practice. I am constantly inspired by new connections and new activists as I continue to learn and connect with new people. Today, I see the process of artistic creation and political organization as inseparable parts of the same whole- each feeding the other.

My paintings focus on people who lead transformative change; historic figures and present-day community organizers, and showing connections between the two. I am fascinated by the humanity of people working to change the world: by their dedication despite their flaws, and their greatness even amidst difficult or humble circumstances. Art allows people to rapidly build emotional and relational bonds across time, space, and experience. I see my paintings as a bridge between the complex feelings that motivate organizers and people outside of this work. My work is a form of storytelling and memory, for both the viewer and for the subjects. My paintings work to elevate, explore, humanize, and valorize- connecting the viewer and subject to the struggle.

I use a mixture of processes to compose my paintings including reference images, sketches, and when possible collaboration with the subjects. When depicting living people, I prioritize meeting with the subjects of my paintings. We discuss what drives their work, what keeps them going, what I see, what they want to share, and ultimately how I could build all of this into a painting. I focus on a representational practice that encourages empathy with the subjects of the work. This allows the viewer to move beyond established narratives, and understand on an emotional level what drives the people who fight for a better world. Transformative change isn’t just about understanding a theory – it’s about remembering who we are, who we were, and what we are capable of together.

Ian Matchett’s work is currently on display in the Carr Center Gallery as part of the current exhibition “With All Our Might.”

You must register for timed tickets to see the exhibition