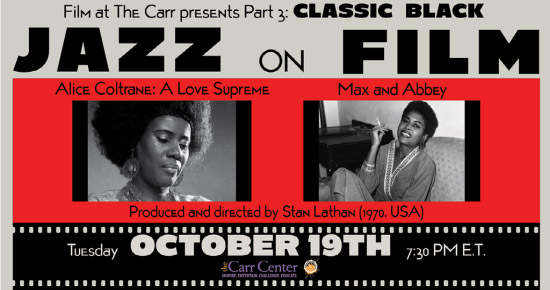 In Part 3 of this, Film @ The Carr, 5-part series, curated and hosted by Carr Center Resident Artist and noted film director Juanita Anderson and Marcus Turner, a Clio winning, Emmy nominated film director, will delve into the archives of Black Journal; a groundbreaking PBS television program that featured documentaries on Black intellectuals, activists, entertainers and others as part of its mission to explore what it meant to be Black in America.

Jazz on Film : Part 3 will explore two films from this important archive

Filmed only three years after her husband’s death, Alice Coltrane reflects on the legacy of John Coltrane, on her family, her spirituality and her music.  This short documentary features Alice Coltrane on harp and piano.

Max and Abbey, produced and directed by Stan Lathan (1970, USA,)

In Norfolk, VA, Max Roach and Abbey Lincoln share their thoughts on African American music, their relationship, and the role of Black artists as they rehearse and perform with the Norfolk State College Choir. Featuring George Cables on piano, Woody Shaw on trumpet, Reggie Workman on bass, and Gary Bartz on saxophone.

The film screening will be immediately followed by a LIVE talkback with curators Juanita Anderson and Marcus Turner and their invited guests: Angela Fontanez – Associate Producer, Max & Abbey and Production Coordinator for Black Journal, Adegoke Steve Colson-pianist/composer and Iqua Colson-vocalist/composer.