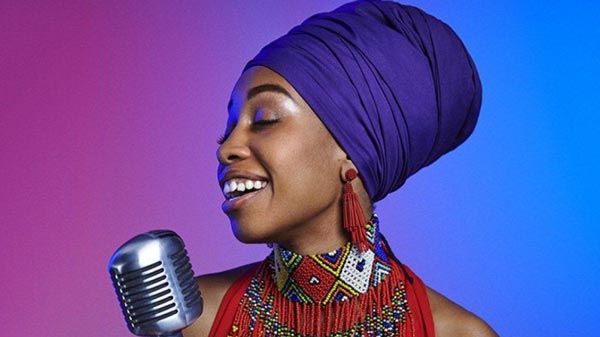 Jazzmeia Horn is an accomplished artist, designer, singer and songwriter. Her vocal gifts have been compared to the stylings of such iconic women of Jazz, as Betty Carter, Sarah Vaughan, and Nancy Wilson.  She has been nominated  three times for a GRAMMY Award for Best Jazz Vocal Album and won the prestigious NAACP Image Award for her soul-stirring Jazz Album, “Love & Liberation.”

Born in Texas, in 1991, Horn grew up in a creative, spiritually minded family and was introduced to singing by her grandmother, a gospel pianist with an abiding love of jazz. Although she sang from an early age, it wasn’t until high school that she developed an interest in jazz. Introduced to Sarah Vaughan by her music composition teacher, Horn fell in love with Vaughan’s style and worked hard to learn her phrasing and inflection.After graduating fromManhattan’s New School for Jazz and Contemporary Music, Horn immersed herself in the New York scene, performing alongside such luminaries as Billy Harper, Delfeayo Marsalis, Mike LeDonne, Peter Bernstein, Vincent Herring, and many more.

Her profile rose significantly when she won Newark’s 2013 Sarah Vaughan International Jazz Competition. Two years later, she solidified her place as a bona fide star after taking first place in the Thelonious Monk International Vocal Jazz Competition. In 2017, as part of her Monk Competition prize, she released her debut full-length album, A Social Call, receiving a Grammy nomination. In 2019  her sophomore album, Love & Liberation, also received a Grammy nomination for Best Jazz Vocal Album. In 2020, Horn delivered her first big-band recording, the Grammy-nominated Dear Love, which found her working with her 15-member Noble Force ensemble.

Jazzmeia returns to Detroit as part of the New Standards Installation, Part 1 of Shifting The Narrative: Jazz and Gender Justice opening in the Carr Center Performance Suite on October 14th and running through November 27th. She will also be performing as part of the 13- part concert series, New Standards Jazz Crawl  on Friday October 27th inside the Performance Studio @ 9pm