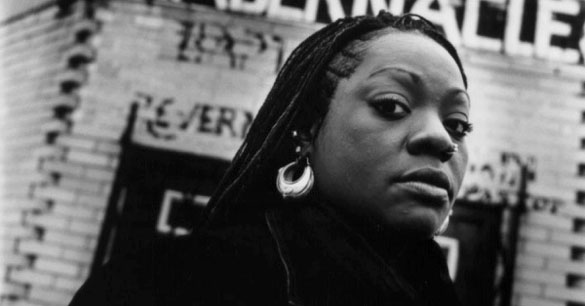 Thornetta Davis a multi-talented International Blues Singer and Songwriter from Detroit MI.  She is the Winner of over 30 Detroit Music Awards, including sweeping the 2017 and 2018 DMA’S and a six time BLUES MUSIC AWARD NOMINEE including two 2021nominations for Soul/Blues Female Artist and Instrumentalist Vocals.

She first gained attention in 1987 when she became back up singer for the Detroit soul band “Lamont Zodiac and The Love Signs”. In 1996 Thornetta recorded her first solo album “Sunday Morning Music”  on the Seattle based label “Sub Pop” which received a rave revue in Entertainment Weekly magazine. Her song “Cry” from that album was featured on the HBO hit “The Sopranos”.

20 years later, her second album release, “An Honest Woman”, reveals Davis as a mature, commanding vocalist, introspective composer and demanding producer. She wrote all of the material, and the songs are personal statements that take a lifetime to achieve, and careful listening to assess.

In 2001 Thornetta Davis was inducted into the Detroit Music Hall of Fame and she has electrified audiences across the globe with tours to Italy, Blues festivals in Tunisia North Africa, Lucerne Switzerland, Sweden, Paris France, Norway, Germany, Holland, England and Canada .

Register for your direct access links to her September 7th concert.